No Result
View All Result

A contract is an agreement that meets the requirements of the law between two or more parties. It clearly outlines the mutual obligations of both parties involved. Also, it spells out the consequences where either of the parties violates the terms of the contract. A contract has the effect of binding the parties legally.

Now, is marriage a contract?

There are many views to the question, is marriage a contract? We need to examine these views to understand the concept of marriage fully. Many argue that marriage is more of an institution or covenant rather than a contract. However, the difference in opinion is mainly because these people have a different understanding of the term contract.

Can White People Have Curly Hair – What You Need To Know

5 Signs Of A Great Punjabi Suit

The first usage of the term “marriage” was in 1250-1300 CE. The word comes from the French word “marier” meaning “to marry,” and the Latin word “maritare” meaning to give someone a husband or a wife.

Before now, marriage referred to the coming together of a man and a woman to become husband and wife. However, it is not a definition that captures the realities of present-day society. Other forms of marriage do not include one man and one woman.

Why Do People Marry? 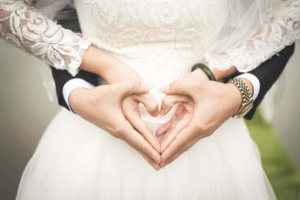 Christians believe that marriage is a system God put in place to fulfill His plan on earth. Thus, they believe that the primary purpose of marriage is to fulfill the will of God. Recent studies have also shown that people perceive traditional marriage as an effective method of preserving cultural heritage in society

Although these are all significant factors to consider when getting married, we must note that marriage goes beyond these reasons. In marriage, each partner owes the other, economic, social, and physical responsibilities.

Religious And Cultural Perspective Of Marriage

Public findings show that the religious and culturally-inclined populations often see marriage in terms of a covenant rather than a contract. Religious individuals see marriage as an avenue for giving out one’s entirety to another, as opposed to the philosophical approach, which tends to see marriage as a contractual relationship between the two parties.

Religious folks see marriage as a covenant between two parties, and a superior authority, which is God. Also, the early Roman Catholic Church made a decree that two individuals could decide to get married regardless of if there were witnesses or a priest there to join them to sign an agreement. They believed that the only witness required was God.

In some cultures like South Asia and Africa, we have arranged marriages. In such circumstances, one may be required by the beliefs of a particular culture to marry. It is a form of marriage that has no regard for the desires of both parties involved.

Also, in nations like India, individuals are given out in child marriages, even when they are not up to the age of accountability. It is opposed to the ideology of a contract because, in a contract, there is the mutual consent of the parties involved

Philosophical And Scientific Perspective Of Marriage

Many philosophers and social scientists often point to marriage as a contract because it is legally binding. To them, it is a contract instituted by an agreement between two parties bound by the court of law. As a result, the parties have duties and obligations to each other.

They firmly believe that it is indeed a contract, and if society starts to see it in that perspective, it will prevent a lot of conflict between the parties. They argue that marriage is a contract because before a man or a woman can get married, they have to sign an agreement in the court of law. The agreement that they signed has to bear on various aspects of their lives, such as property possessions, debt payments, inheritances, and settlement, if in the case of divorce.

In the westernized countries, for instance, there are a lot of requirements for one to be eligible for marriage. Some of them are age limitations and the prohibition of marriage within one’s close family relatives. Since the parties enter into these marriages as a result of the exercise of their free will, and there are no mandatory requirements, marriage becomes more of a contract.

The Comparison Between Contracts And Covenants

A contract refers to an agreement, which is usually between two or more parties formally recognized by the authorities and authorized by a law court. Studies show that contracts are a result of the lack of trust between the two parties. Thus, it clearly outlines the obligations of the parties.

It also defines what the consequences are for any breach that arises. A contract is legally binding and adheres to the laws of society. In cases an individual goes against the rules and obligations as outlined in the contract, that contract may be annulled or broken.

A covenant, on the other hand, hinges on creating a relationship between the parties involved. People enter into covenants based on the trust and commitment they have for each other. Also, a covenant is not legally binding.

Instead, it is more of a spiritual agreement rather than a formal one. Thus, a covenant does not have any expiry date. It lasts long and based on the eternal promise

Factors To Consider To Decide If Marriage A Contract Or Covenant

Contracts are usually for a specific period and nullified when that duration elapses.

In this sense, one can say marriage may not be a contract. It is because most marriages hinge on the ideology “till death do us apart.” The ideology does not conform to the contract laws, while covenants can exist for eternity.

The majority of individuals enter into a marital agreement on the foundation of love. They marry to receive the best of their spouse and compromise where necessary. However, when their partner does not meet these needs, the couple may tend to revert to a contractual mindset because contracts rely on mutual agreements and not on emotions or feelings. The drive for a contract is the motive to gain something from the other party.

In a covenant, a spouse can make a lot of promises to the other without any strings. However, it is not obtainable with a contract. In a contract, the duties and obligations of the parties are clear, with the conditions attached to it.

We can say that before you join a man and a woman, they still have to sign an agreement in the court of law. However, many married couples say they signed it because it was a requirement for them to marry. Thus, they did do it out of their free will.

From a contractual perspective, it is a fact that the two parties are accountable to each other. Where one infringes on the rights of the other party, he or she must bear it. However, when it comes to a covenant, the aspect of forgiveness always comes in, as forgiveness is a significant factor in keeping a successful marriage.

What If The World Regards Marriage As A Contract?

In our present-day society, where the rate of divorce is on the increase, one might need to reconsider the idea of marriage strictly as a contract between the parties. Most times, people differ on what love is, and what should be the qualities of the person they intend to marry. It is some of these issues that arise in the course of the marriage.

However, let’s look at it from another angle. What if before a marriage takes place, the parties outline the duties and obligations of each other? What if they clearly state their likes and dislikes in their marriage agreement as mandatory? Moreover, it is what is obtainable when we are entering into a contract with our partners.

In a business contract, the parties clearly outline their obligations and expectations. The question is, do we enter into a supposed life-long commitment without clearly defining what our marriage ought to be like and making it legally binding?

There is no clear answer to the question, is marriage a contract? It is because we share different perspectives on the subject. However, in my opinion, it seems like a blend of both a contract and a covenant.

Nevertheless, marriage becomes a contract on the basis that there is an agreement signed between both parties. Marriage is also a covenant because the operation of marriage doesn’t obey all the strict contractual laws.

Can White People Have Curly Hair – What You Need To Know

Curly hair and white people have historically been two of the most discreditable things about each other. While some will...

5 Signs Of A Great Punjabi Suit

What Exactly Is A Punjabi Suit? For those unsure of what a Punjabi suit is – it's a traditional and...

Five Tips To Make A Winning Offer In A House

Buying a home is one of the most exciting journeys for most people. But before you are given the keys...

How To Make Your Tongue Longer – The Ultimate Guide

Your tongue is one of the most unique and mysterious parts of your body. Some people have long tongues while...

No Result
View All Result